Add a story and pictures to let people know about your progress. Stories also serve as a proof of authorship.

What are you uploading?

A 3D model with textures and materials.

Matters that are recreated procedurally or through a Physically-Based Rendering workflow. 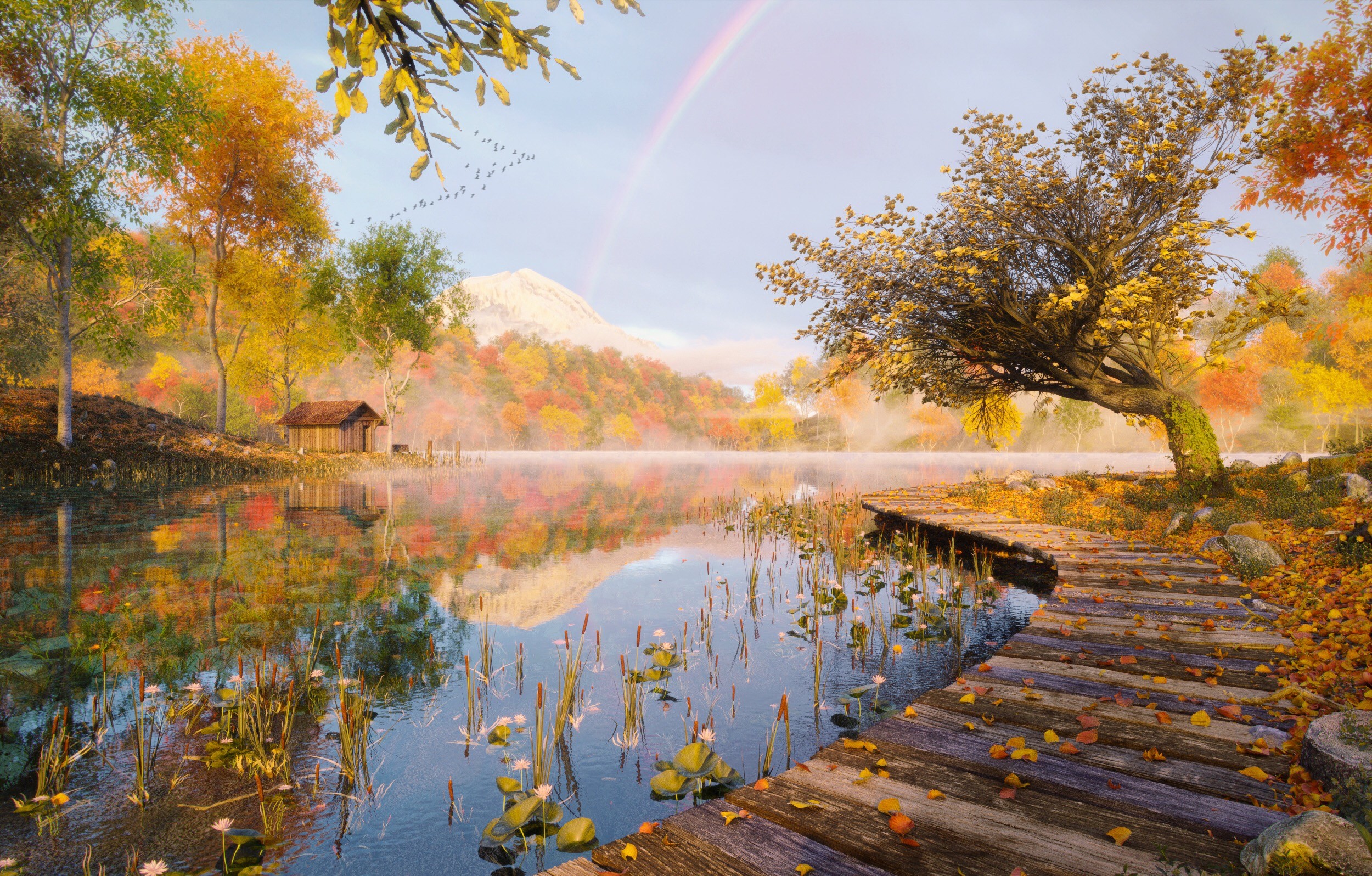 I was looking for a personal work about a natural landscape after seeing some photos on the web, specifically a photo of a curved tree. Then I knew about this competition and I decided to do my scene with an Autumn mood.

I do Archviz for a living, so this kind of nature scenes are not usually asked by clients and I always use my personal works to learn new stuff and to explore new techniques and styles, so I decided to do this image.
It needed a lot of landscaping and detail, nature is too random and too loaded of detail, so doing this work was a real challenge for me because I tried to use as less RAM as possible. The scene used only 22 GB of RAM during rendering phase besides it uses millions of proxies and displacement mods.

First I modeled the curved tree in SpeedTree. I have used SpeedTree before using some templates and doing changes to get animated trees for animations but this was the first time I used it to create my own tree from the beginning, so this was my first challenge.
Then in 3ds Max I modeled the landscape. I wanted to do an image that was composed with the Golden Ratio, so I modeled the wooden road and mountains to get it.
The volcano is just a cone with displacement maps and the mountains are just just plans with deformations.

As part of my work I create Architectural Animations and I am a "Full 3D" guy, that means that I like to have the most things possible within the 3D Scene so if I have to move the camera, the objects are already there and I do not have to suffer doing trackings or super difficult (for me) VFX compositions. For that reason I decided to go Full 3D with this scene.

I spent a lot of time scattering trees and objects. I put different things such as: Trees, twigs, stones, undergrowth, leaves. Also I put them underwater. I tried to place them correctly so they will look natural.

The scene is divided in Foreground, Middleground and Background, so the scatters have different values ​​between them to use the less instances as possible, optimizing the scene for rendering. Also I played with the scale of them so the ones in the background are a little bigger to be noticeable in the final image.

I also used a lot of Displacement maps. Some remarkable objects are:
-The texture of the yellow leaves up in the foreground (scanned by me using Dabarti Capture Pro)
-The wood bark of the curved tree
-The wooden boards
-The water near the plants next to the boarder.

Also I wanted to try to make the Fog manually, so I placed some geometry over the lake, background trees and around the volcano and I used the VolumeFog material with the help of some displacement maps, I think the result is great and very fast at rendertime.

The final rendertime of the 2500px image was just 40 minutes in a Dual Xeon, so I was very glad with the optimization work I did.

In the postproduction process (After Effects + Photoshop) I only added some stains, birds and all the color grading stuff.

I hope you like it and if you have any question please ask :)
Thanks for reading. 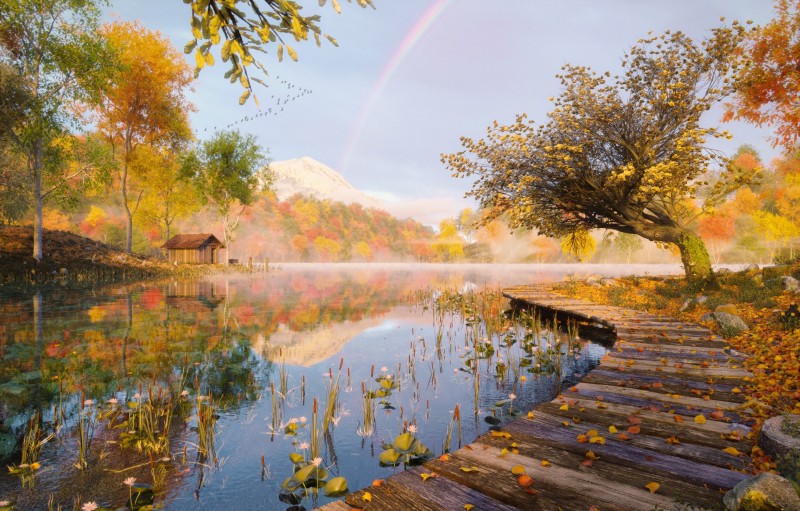 Here’s my final image. I spent a good time doing it and also learned a lot.
I hope you like it too!
Thanks for watching it. 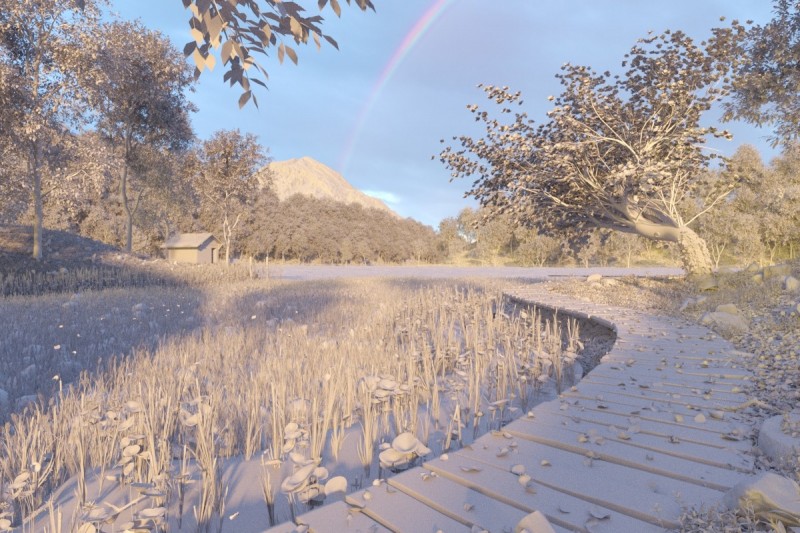 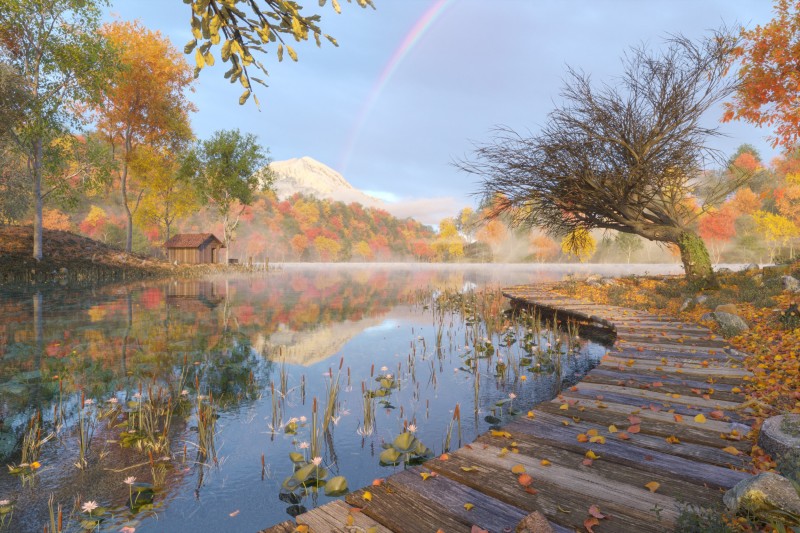 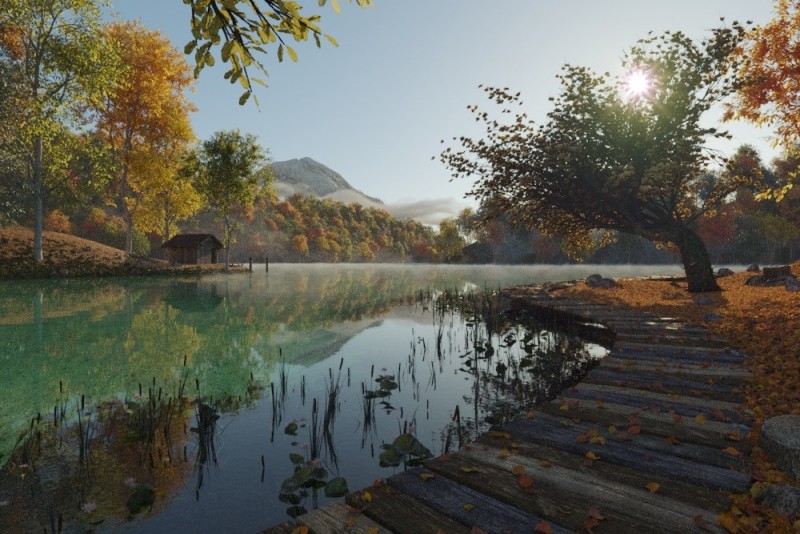 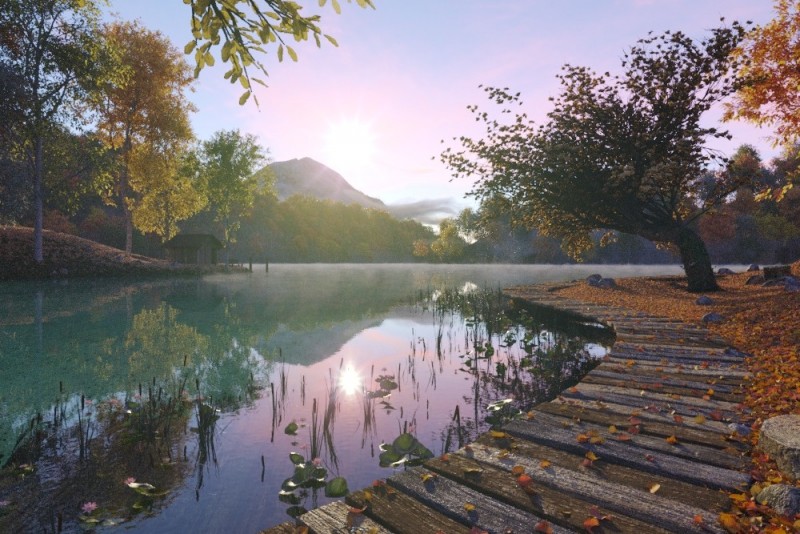 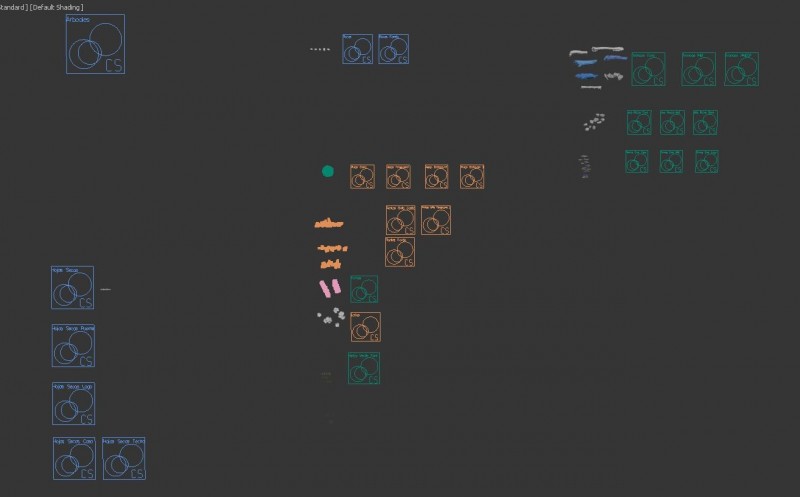 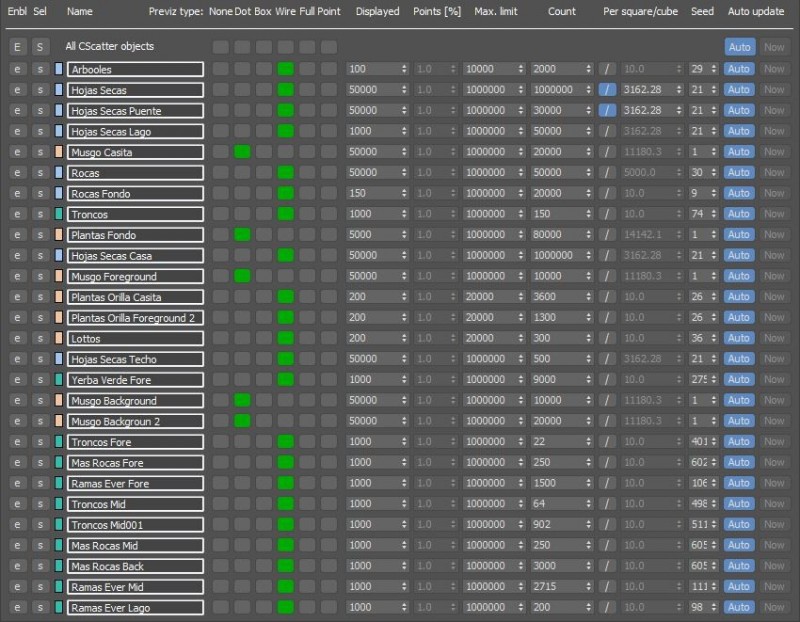 These is the Scatterer's list.
As you can see, they are a lot :P. 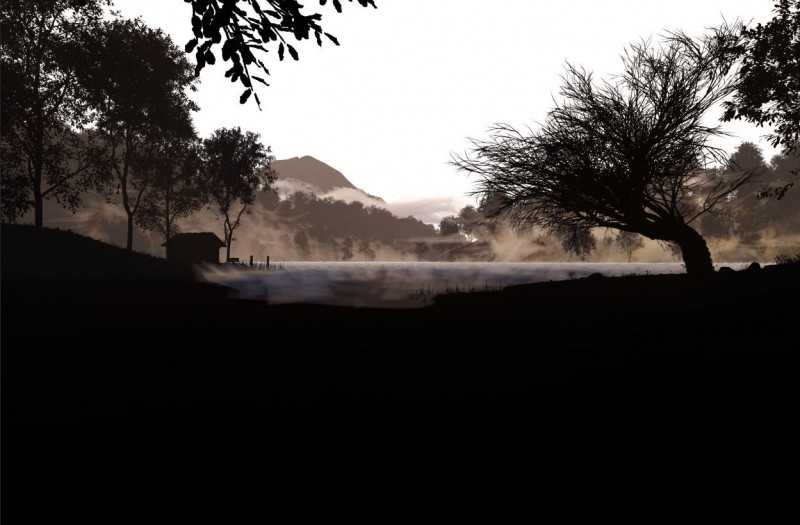 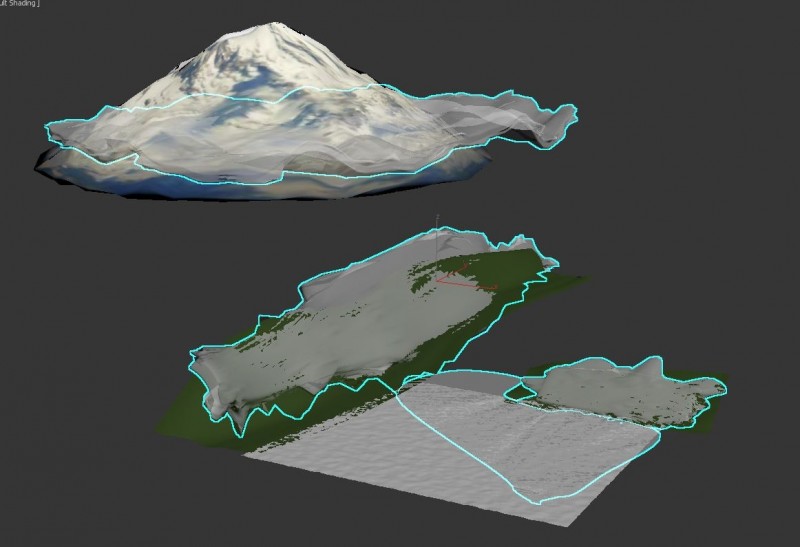 The selected geometry are the clouds I placed to simulate the fog.
I share the material specifications of the VolumeFog 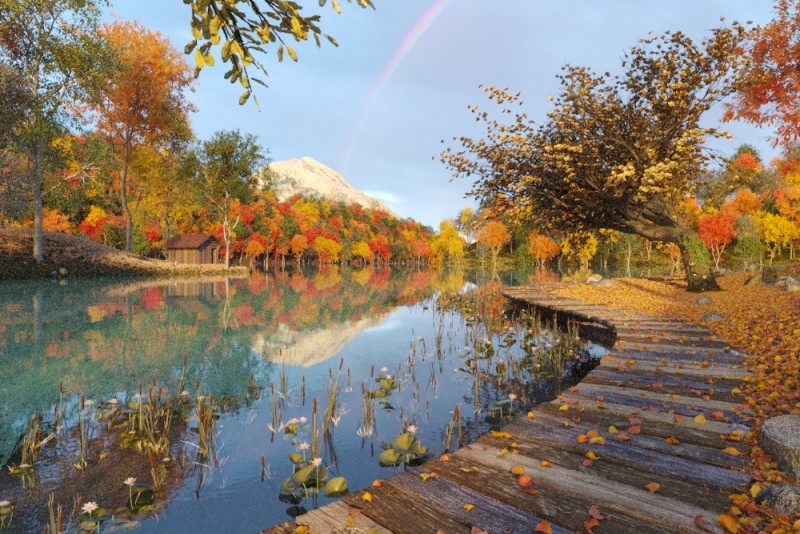 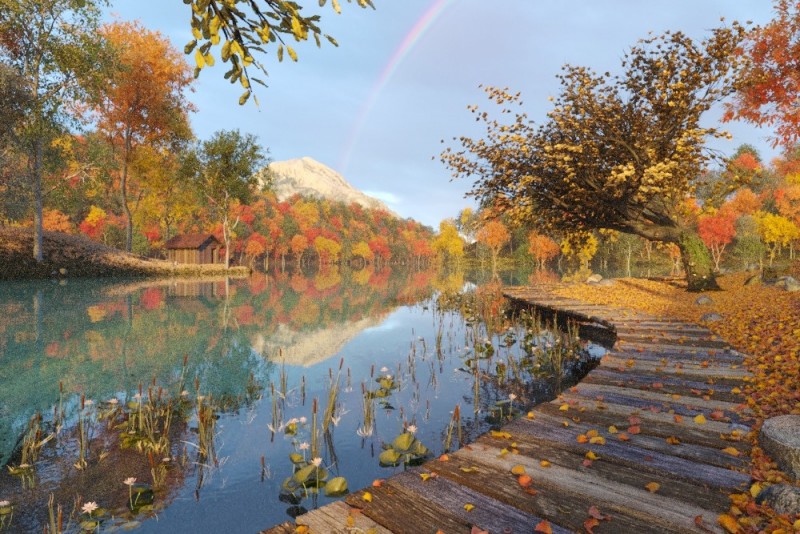 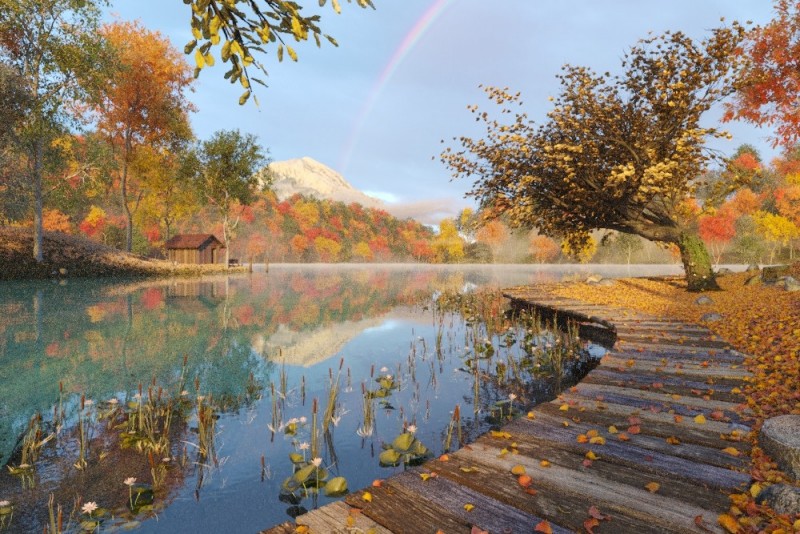 Here's the process of the Fog.
The first image doesn't have Fog.
The second has it on the environment.
And the third one has also the modeled clouds over the lake, through the trees and around the volcano. 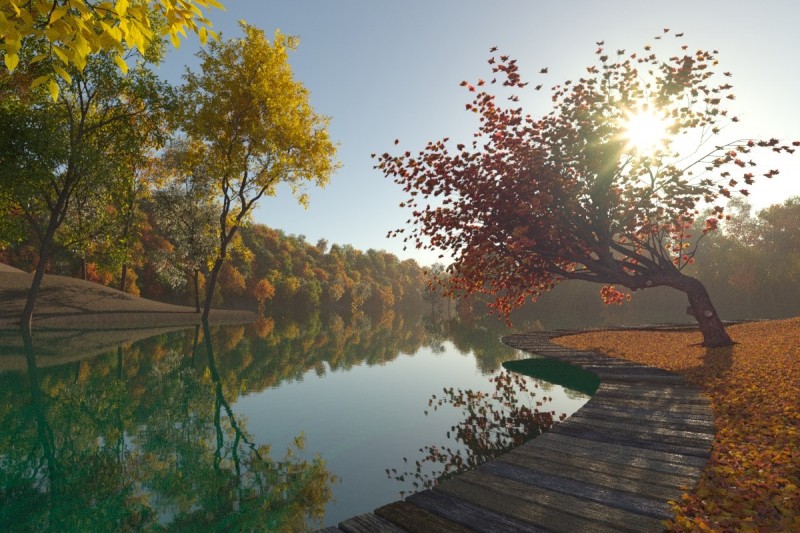 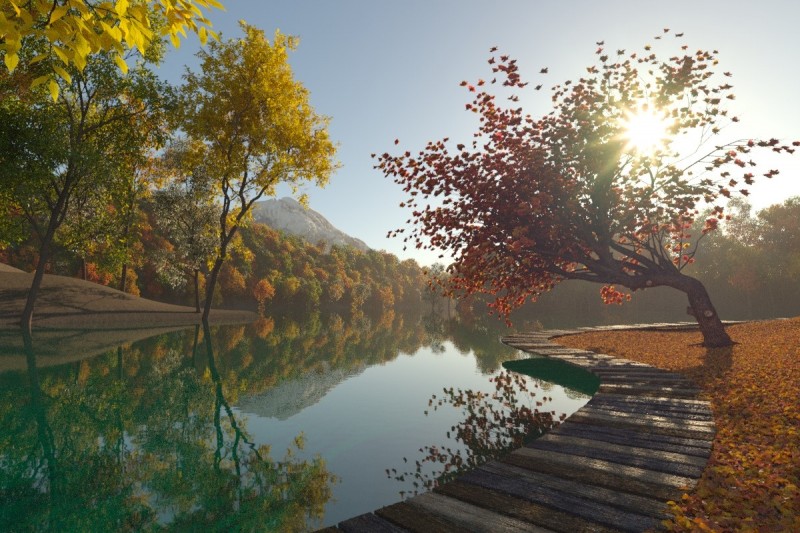 Here are the first test of illumination.
Here I only used a Sun and Sky.
I wanted the sun glare in the image, later I changed the sun position so I sacrificed that detail. 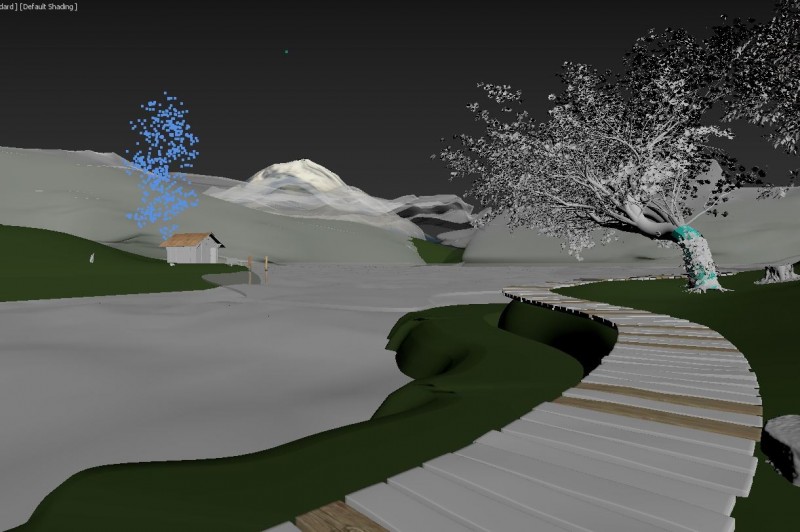 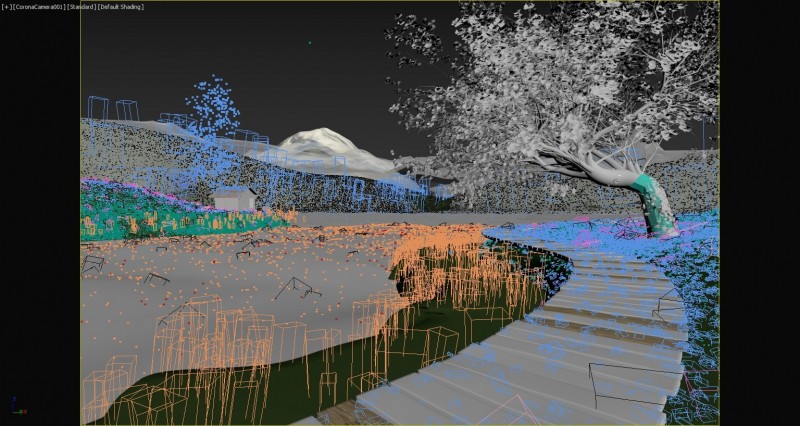 Here you can see the geometry and the scene with the scattered objects. 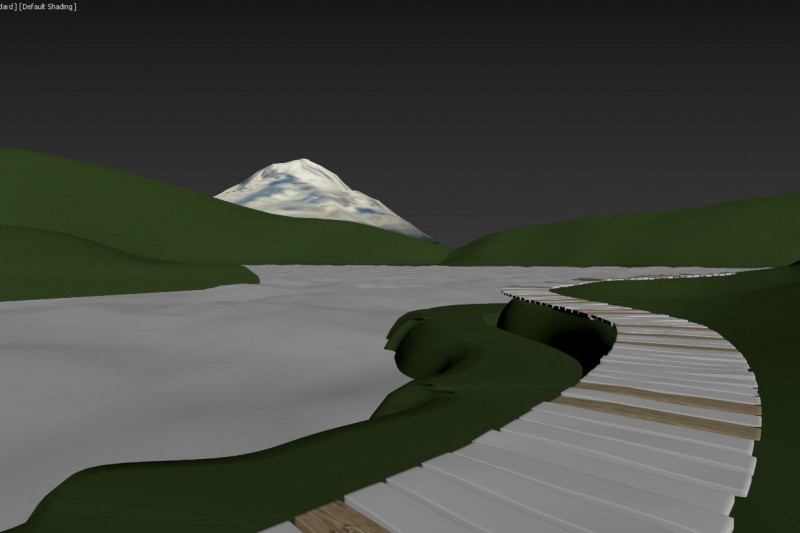 Everything was modeled thinking in a low poly count.
As simple as that. 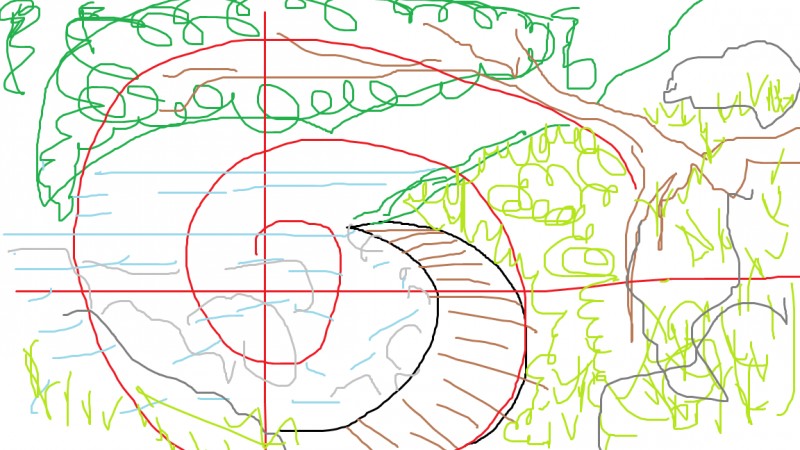 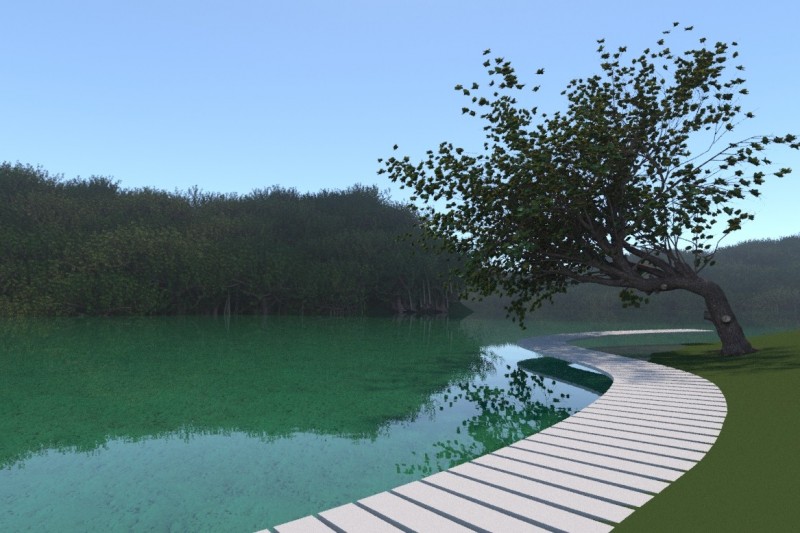 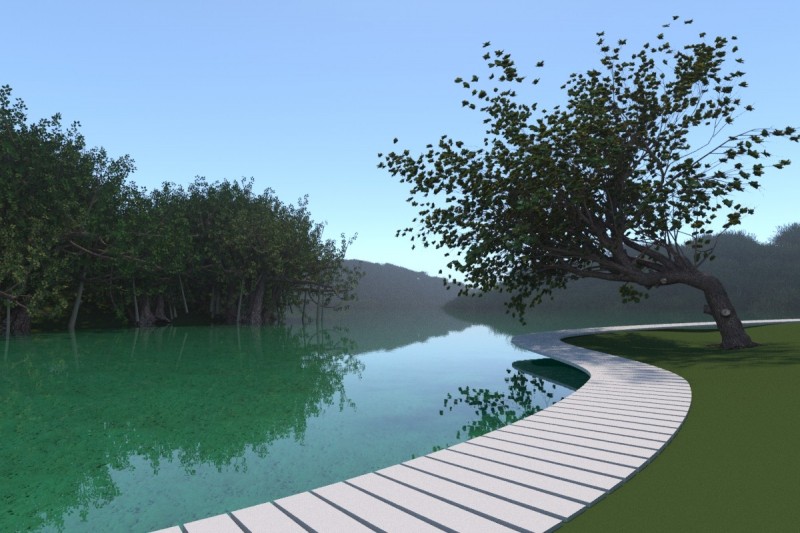 This was the quest for the "Golden Ratio".
Also the basic modeling of landscape and the first scattered trees to get a general idea. 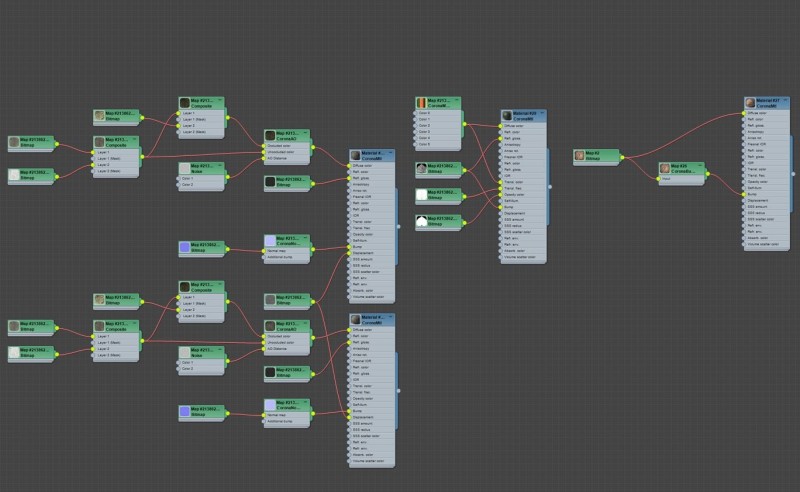 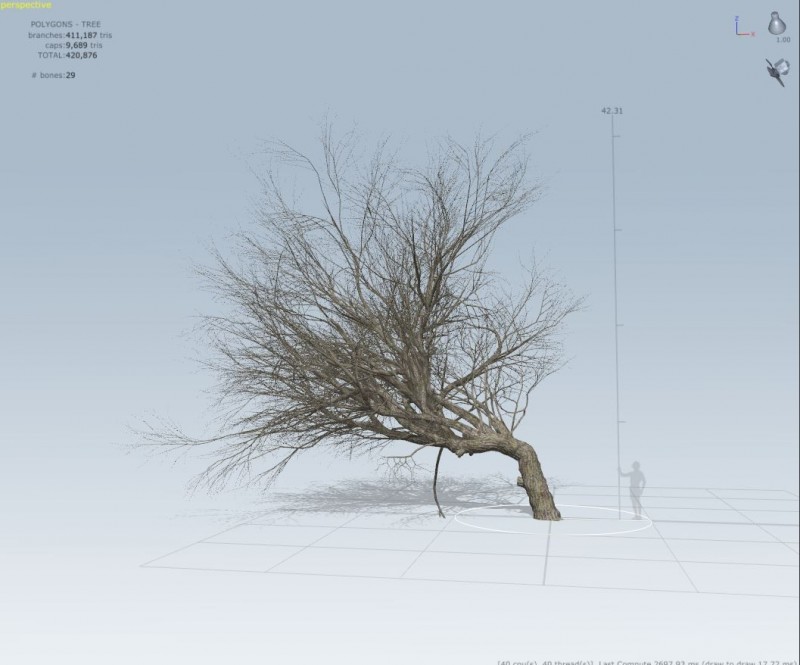 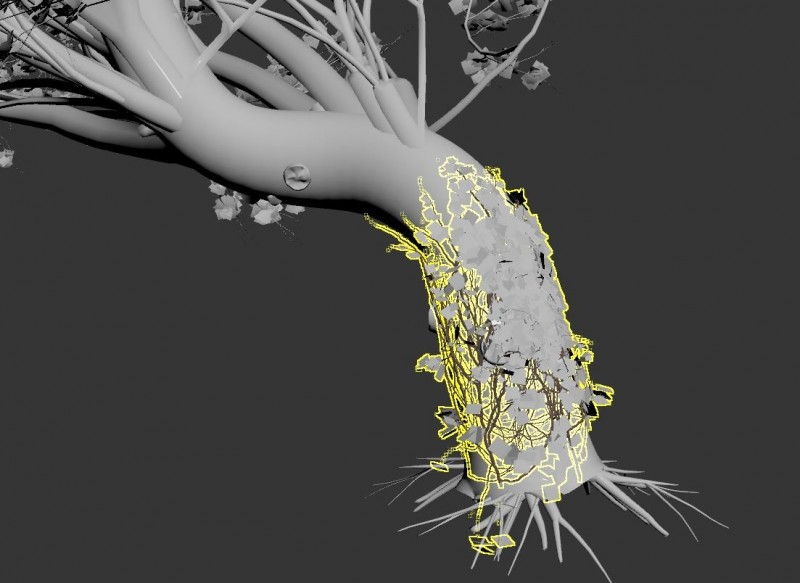 Here's the Tree after modeled with SpeedTree. It was imported as Alembic so I can separate the elements according to its shader.
I added an Ivy plant with Guruware.

As you can see, the materials of the tree are quite simple to avoid problems and higher rendertimes. 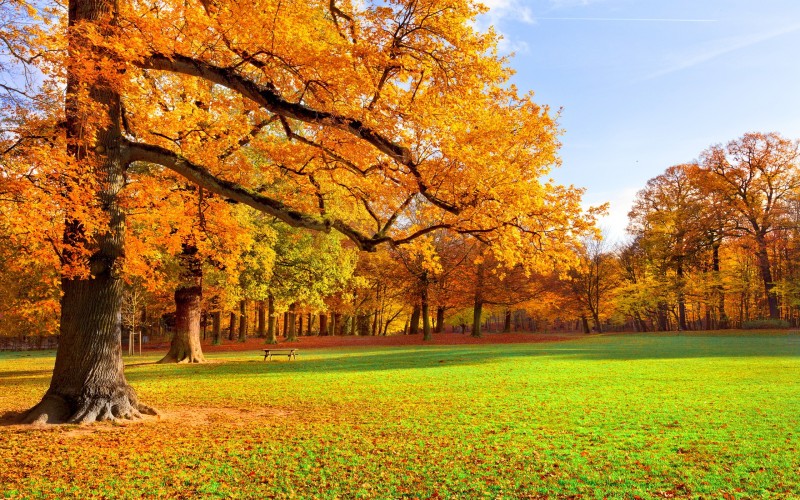 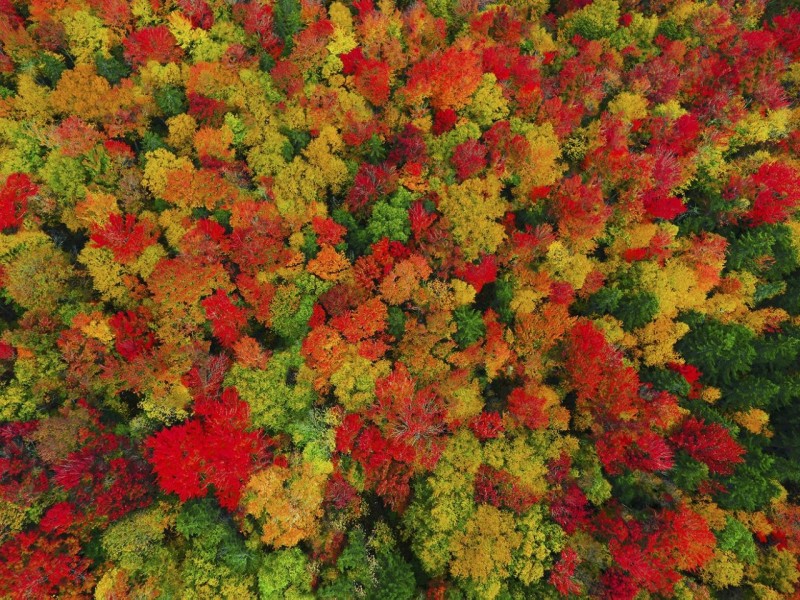 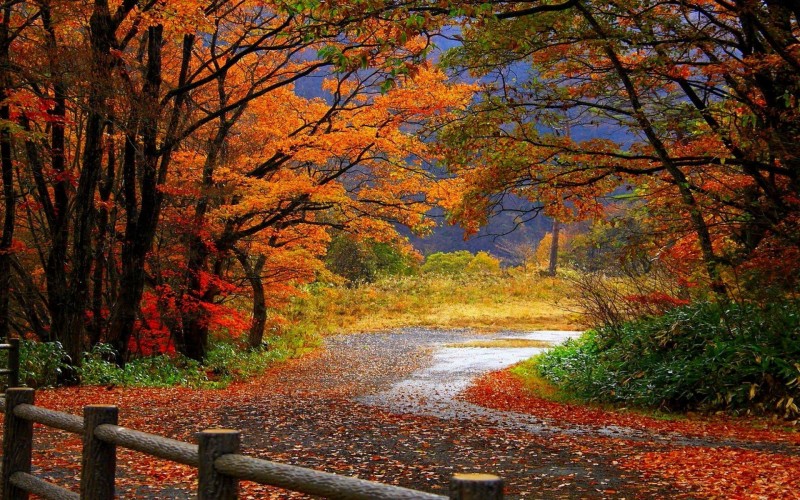 This were the images that inspired my mood.
I like the vivid colors, so I wanted to create something like that. 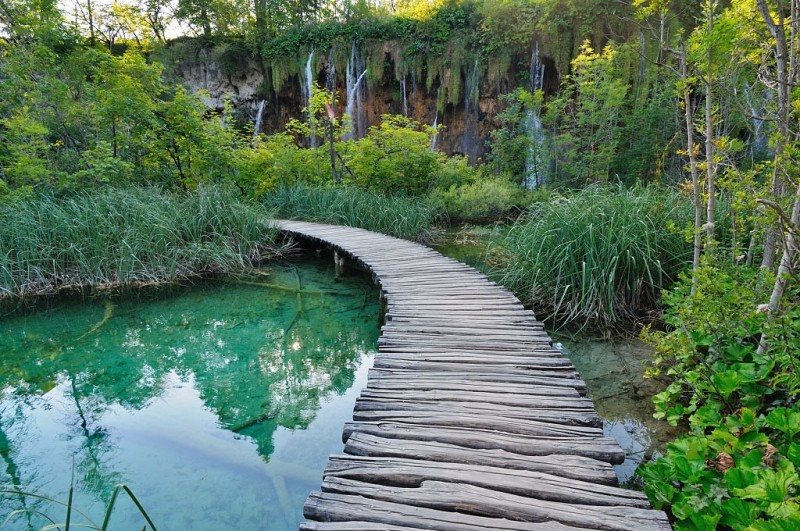 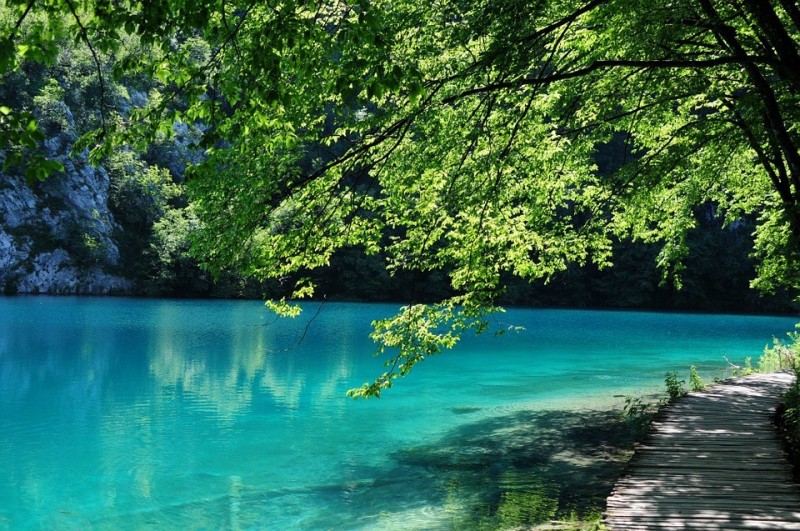 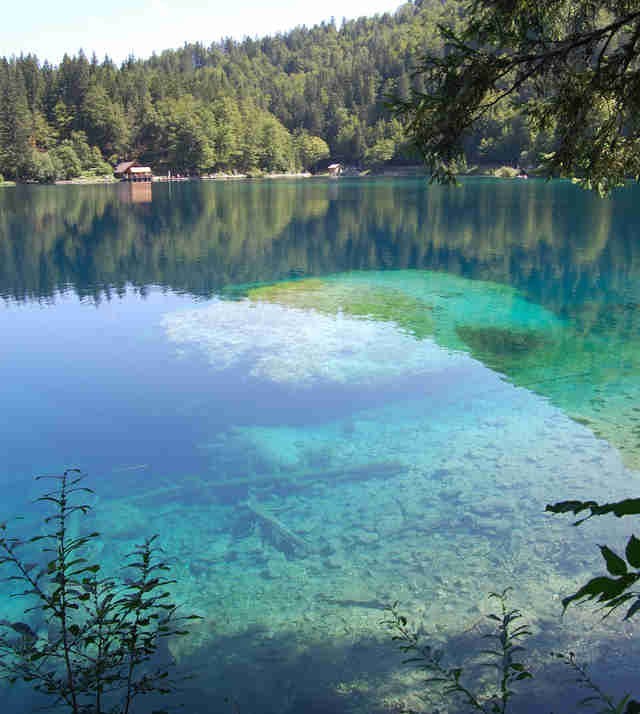 These were my references. I loved the curved tree and I thought it could be a challenge for me to create a tree like that in 3D.
Also I liked how that wooden boards are curved so I could use them to get a "golden ratio" based image.